You are here: Home / Pocket Knife / What Are the Best Spring-Assisted Knives Under $50?

Inexpensive spring-assisted blades (also called assisted-opening knives) are extremely popular right now, both with aficionados and everyday knife collectors.  Their advantages are many: as Nutnfancy, the popular YouTube gear reviewer puts is, they offer a reliable, fast deployment while also eliminating (or at least severely reducing) human error. Even the silkiest, fastest manual flipper knife could misfire from time to time but, barring a mechanical failure in the parts themselves, an assisted-opening knife won’t suffer from that issue.

Besides the utility value, assisted-opening (which I will call “a/o” from here on out) knives are just fun.  There’s something addicting about the automatic, super-fast thwack of an a/o knife being deployed.  It’s hard to explain if you aren’t a knife knut, but the almighty “fidget factor” is at its purest with a/o knives.  Once you pick one up and starting playing with it, it’s hard to put down.

Being as popular as they are, there are so many different a/o knife choices out there that it can be hard to know where to look.  It helps to narrow down your search a little bit to a certain price bracket.  Since many people’s first “real” knives are an a/o, and since most people don’t want to spend a fortune on their first knife (the big spending comes later down the line of knife addiction), I’ve chosen what I think are the five best spring-assisted knives under $50, and will discuss in depth each selection that makes our list.

Below, please use the interactive table to compare some of the most popular pocket knives available on the market today:

Okay, so your budget is about $50, you say?  Well, we’ve compiled a top five list of sub-$50 knives that we think are worthy of your consideration.

Let’s get right into it.

There’s going to be a lot of Kershaw knives on this list.  At higher price points it gets a little more diverse, but Kershaw pretty much dominates the entry-level a/o knife market.  They marketed the first assisted-opening mechanism with Ken Onion, and thus began their reign as the foremost purveyor of the assisted-opening knife.  Perhaps their most famous a/o knife ever is the Leek, a Ken Onion knife design.

The Leek is a bonafide modern classic.  Everyday Commentary has called it the Camry of knives.  Although its ubiquity has begun to wane a little bit in recent years (due no doubt in part to some of the knives below), the Leek still deserves a mention on this list.  It offers the user an excellent steel, 14C28N, a very discreet pocket carry, and a useful blade shape, all in a $45 package.

Additionally, if you wanted to spend a little more you can buy any number of Leek variants with different steels, including:

If there’s a downside to the Leek, it’s the fragility of its blade.  Although the tip is almost always the most fragile place on a knife, here it’s particularly susceptible to drops, torques, prying, etc.  Although you should always be reasonable in your use of a pocket knife, the Leek’s tip could still stand to be a little stronger.  I also find the clip, while functionally sound, to be a little big.  Still, these issues can’t stop the Leek from still being one of the best a/o knives ever made.  You can own one for $45.

If any knife could claim to have nudged the Leek somewhat out of the a/o spotlight, it’s the Cryo.  Like the Leek, it’s convenient, affordable, and designed by an in-vogue knifemaker (Rick Hinderer).  That being said, the two knives are very different in terms of the way they function. 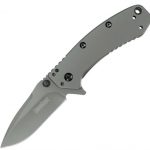 The Hinderer drop point on the Cryo is a much more robust blade than the Leek’s modified sheepsfoot.  It’s not quite the slicer that the Leek is, but it’s no slouch and more durable, so I’d say overall I prefer the blade on the Cryo, even if it is a close call.

The blade is made from 8Cr13MoV steel.  This is an entry-level modern stainless steel that you see quite often on lower-priced knives.  It is totally adequate, but compared to the 14C28N of the Leek it leaves a little bit to be desired.  It is by no means an atrocious steel, particularly if you’re new to modern folders; it simply isn’t quite up to the standard of higher-end steels like 14C28N.

The Cryo comes in two flavors: a very heavy stainless steel version, and a version with a G-10 show-side scale.  This is the version I recommend; not only is it lighter, it is also grippier, and that can be pretty important on these a/os, because they do have a little kick to them when you fire the blade.  Either way though, the Cryo is an excellent, affordable introduction to a/o knives.  The G-10 Cryo costs $32.

The Link is by far the newest knife on this list.  Whereas all the other blades have a proven track record, the Link has been out for less than a year, but despite this I think it’s one of the best a/o knives around.

It has one of the most interesting blade shapes on the list.  It combines the funky, elegant utility of the Leek with the durability of the Cryo; the result is a unique blade shape that cuts well but doesn’t need to be babied.

I also am a huge fan of the handle.  The overall shape is reminiscent of the Kershaw Knockout, which is a wonderful knife and would make this list if it weren’t a little too expensive.  The Knockout’s handle is spacious and simple, and that’s what we get on the Link as well.  In fact, the Link’s thicker FRN handles are probably more comfortable than the Knockout’s thin aluminum scales.

Blade steel on this American-made knife is 420HC.  If there’s a sticking point with the Link, it’s this.  I wouldn’t call 420HC a bad steel, but it certainly isn’t anything great, particularly when compared to the 14C28N of the Leek (or of the Knockout).  It probably performs about on par with 8Cr13MoV, but I find it harder to sharpen.  It is by no means a bear to work with, and really shouldn’t deter you if you’re interested in a brand-new a/o knife design from the company that knows them best.  The Link currently costs $35.

The Kershaw Zing never got the attention it deserved.  Designed by R.J. Martin, it was originally released at two different price points: a high-end version with better steel but with a hideous scalloped blade, or the budget version with worse steel but a plain, undecorated blade.

There was subsequently an even more budget friendly version, with G-10 scales and a liner lock instead of stainless steel scales and a framelock.  This G-10 model is the one I particularly recommend, although all three are cool knives.

The primary appeal of the Zing, for me, is the blade shape.  If you like the Link’s blade shape but find it a little wide or bulky, then the Zing might be just the ticket.  It is a modified sheepsfoot, with a pronounced tip and a decent run of belly, meaning that this knife excels at slicing and piercing tasks.  And, like the Link, it isn’t nearly as fragile as the Leek.

I like the Cryo but, while Hinderer designs have a lot of merits, they don’t tend to be amazing performers.  R.J. Martin’s Zing, however, is in another class altogether.

With that said, the Zing, no matter which version you get, has an extraordinarily bad pocket clip.  It is a kind of curlicue, and not only does it look ridiculous, it is also too tight and very weak.  You’ll struggle more than you should have to getting the Zing in and out of your pocket every time, and it doesn’t take much to bend the clip out of shape entirely.  It’s a disaster.

If Kershaw changed the clip on this knife to something more reasonable, they would have a real classic on their hands.  As it stands, however, the Zing is such a good performer that it still gets high marks, and it’s the most affordable knife on this list.

Either the G-10 or stainless steel version will run you $24.

SOG breaks up Kershaw’s dominance of this list with the SOG Mini Aegis.  I’m not a fan of most SOG tactical gear, but this blade is a winner.

This knife is, as you can probably glean from the name, a shrunken-down version of the full-size Aegis, with a 3” blade to the original’s 3.5”.  I’ll be discussing the smaller model specifically but virtually everything I say about it can apply to its bigger brother as well.

The Aegis has a graceful drop point blade that provides a ton of belly and an acute tip, making it, like the Zing, a good “all-arounder” or EDC knife when it comes to various cutting tasks.  It is also lighter than any other knife on this list at just at 2 oz.  That is an incredible feat for a 3” blade and, combined with the excellent deep-carry pocket clip, you have the best-carrying knife in my opinion.

The steel on the Mini Aegis is AUS-8.  This is a mid-grade steel, a step up from 8Cr13MoV or 420HC, but probably not quite as nice 14C28N.  For what it’s worth, I find SOG’s AUS-8 to be about the best performing iteration of the steel around, holding an edge for a reasonable amount of time and touching up quickly.  SOG also knows better than any of the other major knife companies regarding how to grind and finish a blade, and the keen, even cutting bevel and low-mirror polish on the Aegis’s blade makes the steel perform at its absolute best.

The Aegis is right at $50, but it is also right at the top of its class, performing like a knife in the $80-100 range.  I think it is representative of the level of quality you can expect from a modern a/o knife.

This is just a list of five knives, among hundreds, that fall into the assisted-opening knife category.  There is something for everyone in this very crowded, but very interesting, section of the knife market.  But if you’re looking for a good place to start, or just looking for some ideas for your next purchase, any of these five knives will make a knife user happy.