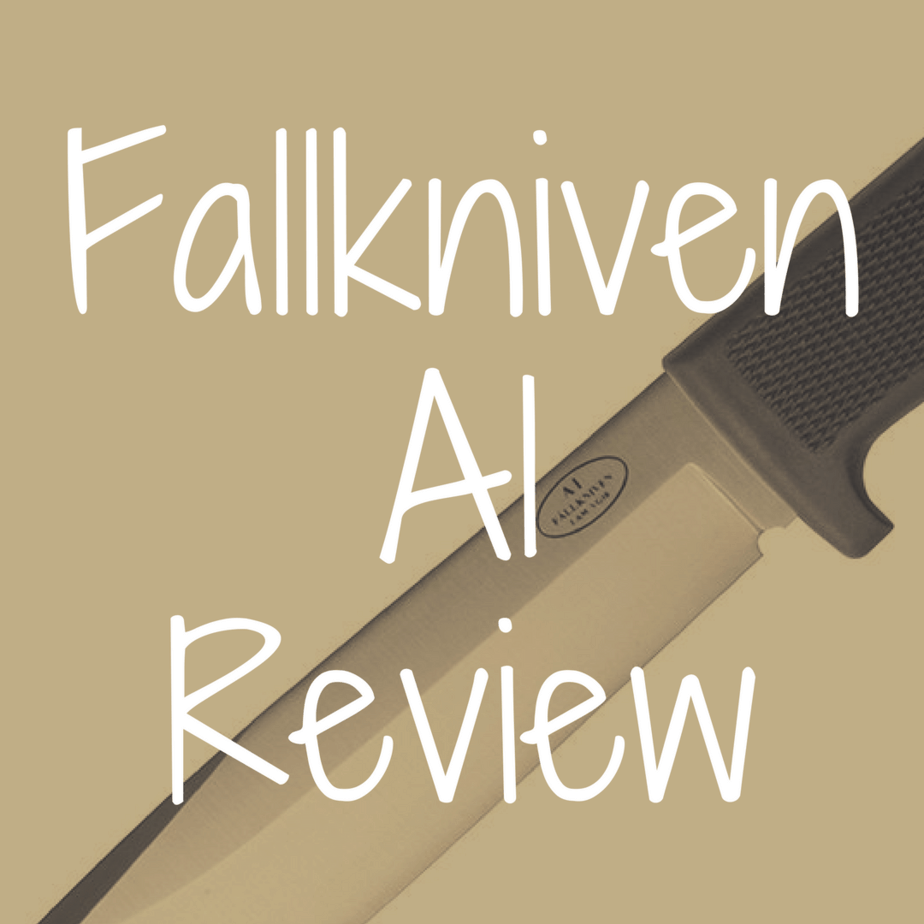 Fallkniven is a company that produces beautifully functional knives.  They don’t make a lot of blades, but each design pushes the limits of the forms they work in.  High end steels and difficult grinds result in exquisite performance, making something as outwardly simple as a camp knife or a fixed blade hunting knife work on levels you didn’t think such plain tools would be capable of.

Over the last few years, Fallkniven has begun to develop a passionate user base outside of their native Sweden.  As the bushcrafting and outdoorsmen scene has grown, so too has the appreciation for Fallkniven blades.  They’re reliable, well-made, and fairly priced.  The only real problem for a prospective Fallkniven purchase is which knife is best to buy.

While this depends largely on what you plan on using your Fallkniven for, the best recommendation for an all-purpose camping or outdoor blade has to be the A1.  It’s big enough for heavy work and small enough for delicate tasks.

The A1 is the perfect representative of Fallkniven’s mission statement, and in this review, we’re going to explore exactly why I feel this way and even see how the A1 stacks up against some other great blades on the market.

Below, please use our interactive table to compare the Fallkniven A1 to other knives that are worth your consideration.

Breaking Down the A1’s History

Fallkniven was founded in the early 80s, originally as an importer of knives before beginning to design and produce its own knives in 1987.  While their products are available to regular users, they also make knives for the Swedish army.

The F1 is the standard issue blade for pilots in the Swedish Air Force, and is considered the flagship knife for the company.  It has influenced most of the designs that followed, including the A1.

“Fallkniven” translates to “The Folding Knife” in English, and while they are most famous for their fixed blades, the company does make many highly-regarded folding knives, such as the U2, a tiny clipless lockback folder with SG2—a very rare supersteel.

The A1, which has a blade length of 6.3,” is a mainstay in the Fallkniven lineup, which also consists of:

The A1’s closest relatives are the A2 and the S1, which are essentially scaled up and scaled down versions of the A1.  As such, those are the other Fallkniven knives I’ll be comparing the A1 to in this review.

In a lot of ways, all three feel like the same knife, but when differences arise, they are subtle but significant.

Companies that get it, that have a genuine, well-earned reputation for hard-use knives rarely, if ever, bog down their handle designs with unnecessary ergonomic flourishes like finger grooves.  These may be popular with designers wishing to make a knife that looks like it can be used hard, but the truth is that the more task neutral a handle is, the better and longer it will work in the hand—through any number of different tasks.

Fallkniven understands this.  The A1’s handle is simple, and simply perfect.  It fills the hand, but doesn’t it force it into one grip or another: you choose how you want to hold the A1, not the other way around.

I also like the thickness of the handle.  This isn’t something that’s desirable in a folding knife handle, because you’re carrying that in your pocket, but the A1’s thick handle fills the hand and, although it’s hard to see in pictures, there’s a rubberiness to the Kraton handle that absorbs shock.

I think the larger A2 is the better chopper, but the A1 is certainly no slouch either, and the handle won’t develop hotspots or bang up your hand during extended chopping.

The Cold Steel SRK is a knife that is very similar to the A1 (on purpose, I’m sure).  Ergonomics is one area in which they are quite different.  The A1 feels heftier, because it is: at 12 oz.  to the SRK’s 8 oz., it’s 50% heftier.  This isn’t a bad thing.  The thick full tang is really noticeable when you’re holding the A1, much more so than the full tang on the SRK.  I think this makes it a better balanced blade than the SRK, which to me feels a little blade-heavy. 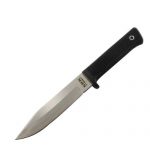 You get one blade shape on the A1: a drop point with a pretty hefty swedge.  Just in terms of the lines,  I really like the way the A1 looks.  Normally I would prefer there to be no swedge, but I understand that the strength it imparts to the tip is important in the kind of jobs you might use the A1 for.

In exchange for that toughness, you do sacrifice a degree of slicing capability.  The A1 will do it, but compared to the similarly-sized, full flat ground ESEE-6, it feels less elegant—a trade most outdoorsmen would be willing to make.

What really brings the blade to the next level, though, and what separates the A1 from something like the Cold Steel SRK or the ESEE-6, is its convex-ground edge.  Convex grinds are a specialty of Swedish and Scandinavian knifemakers and are prized for their resilience to high-impact tasks (like chopping) and generally superior performance and edge retention.

Although I am of the opinion that any grind is effective if it is done right, there’s no denying the raw performance of the convex grind on the A1.  You can work and work and work with this knife, and it will just keep cutting.  Convex-ground knives respond extremely well to stropping, meaning that you will have to perform regular sharpening less often.

It really goes to show just how much a good grind can affect the way a steel performs.  For the A1, Fallkniven chose to use a VG-10 core surrounded by 420J cladding.  VG-10 is traditionally a steel that dulls easily, but in this application a fine edge is less important than a functional one, and the convex grind makes the edge stick around for a long time.  I’ve used VG-10 on a lot of different knives and if the blade weren’t stamped I would have thought it was something much better: that’s how pivotal the grind is for the A1.

The convex-ground VG-10 blows away the 1095 used by the ESEE-6 in every category: it is more rust-resistant, holds an edge longer, and is more durable.  I’ve never understood the survival knife industry’s fixation on 1095; my guess would be that it’s an inexpensive steel to work with.  The SRK uses VG-1 steel, a close relative to VG-10, but the superior finishing and grind on the A1 put some serious distance between it and Cold Steel’s (still very good) offering.

Both the A2 and the S1 have the same steel and blade shape, but the difference in size changes the task spread you’re able to perform with the knife.  The larger Fallkniven A2 is going to be better at the heavy tasks: chopping, prying, that sort of thing.  If that’s something you do a lot with your knife, go with the bigger blade.

Similarly, the S1 is shorter, lighter, more nimble, and better for the light duty tasks.  The A1 is the all-arounder, able to do just about everything the other two can.  It may not feel quite as effortless in those tasks as its more specialized brethren, but there’s a lot to be said for being able to do everything with a single knife.

How to Maintain the A1

Maintenance will be a breeze on the A1.  The Kraton handle is easy to clean, both VG-10 and 420J are very resistant to rust and corrosion, and the convex grind means the edge will stick around for a long time.  This is a refreshing change from most outdoor survival knives.

That’s not to say you shouldn’t do these things to your A1 – simply that, as with its Fallkniven stablemates (and with all good outdoor survival tools), it is designed to require as little maintenance as possible so that you can just get out there and use the thing. 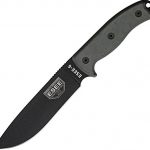 The 1095 steel that is common in many survival knives – including the ESEE-6 – is prone to rust.  The coating that ESEE applies to their knife goes a long way to helping with that, but why start with something that is so rust prone?  The VG-1 on the SRK is about as corrosion-resistant as VG-10, but falls behind in ease of sharpening; the SRK’s conventional grind can’t compete with the almighty convex grind.

The A1 is a top-tier, mid-sized survival knife.  It can do everything its larger brother the Fallkniven A2 can, and most of the more delicate tasks you would call on the S1 to do.  It’s beautiful, unique and durable.  Anybody looking for a reliable camp knife, a lightweight chopper, or just a great fixed blade must take a look at the Fallkniven A1.  It combines traditional features of Swedish knife design with modern materials to make a knife that seems both contemporary and instantly classic. 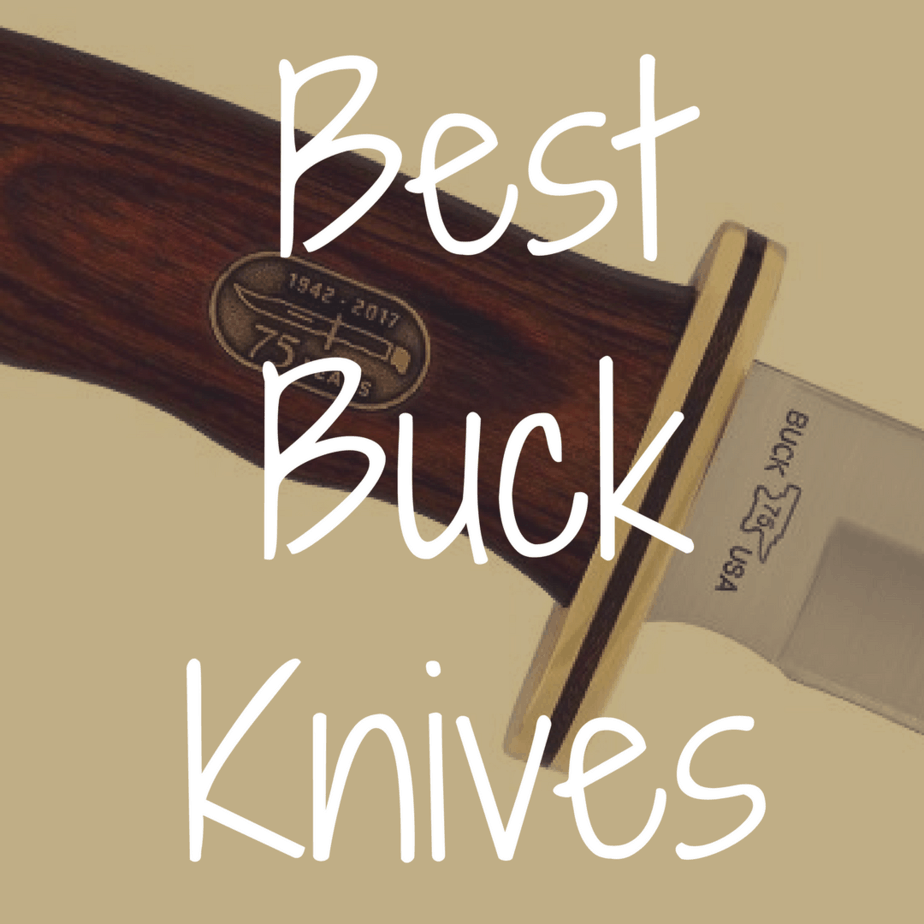 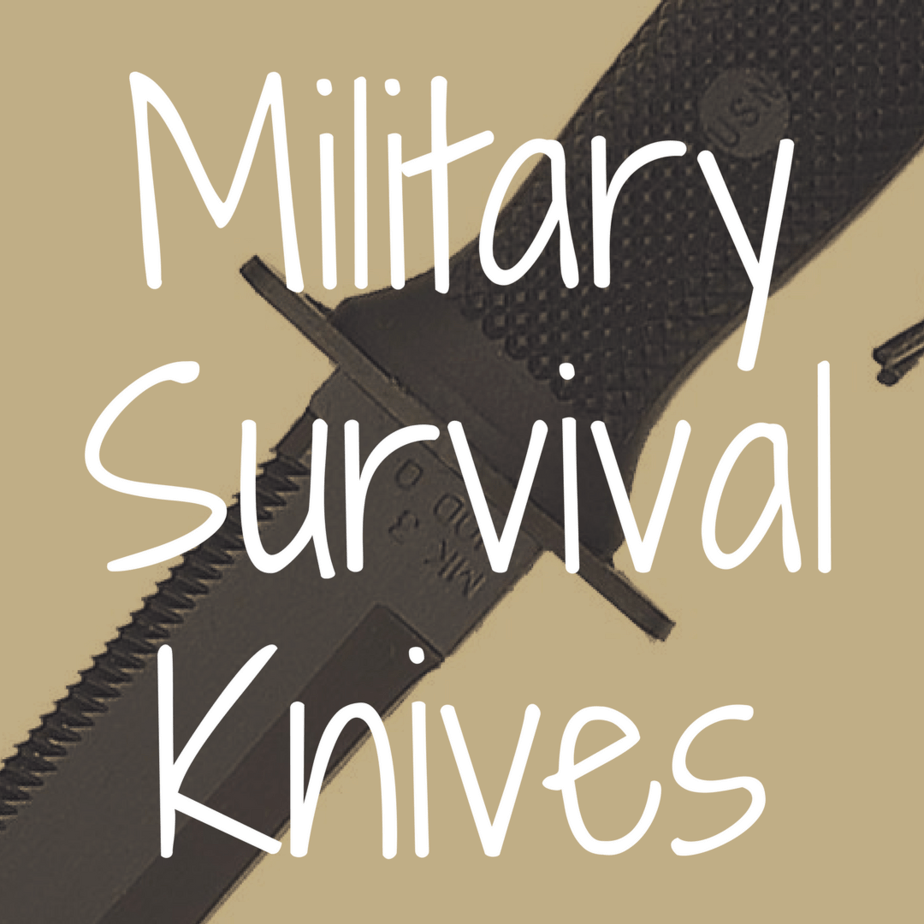 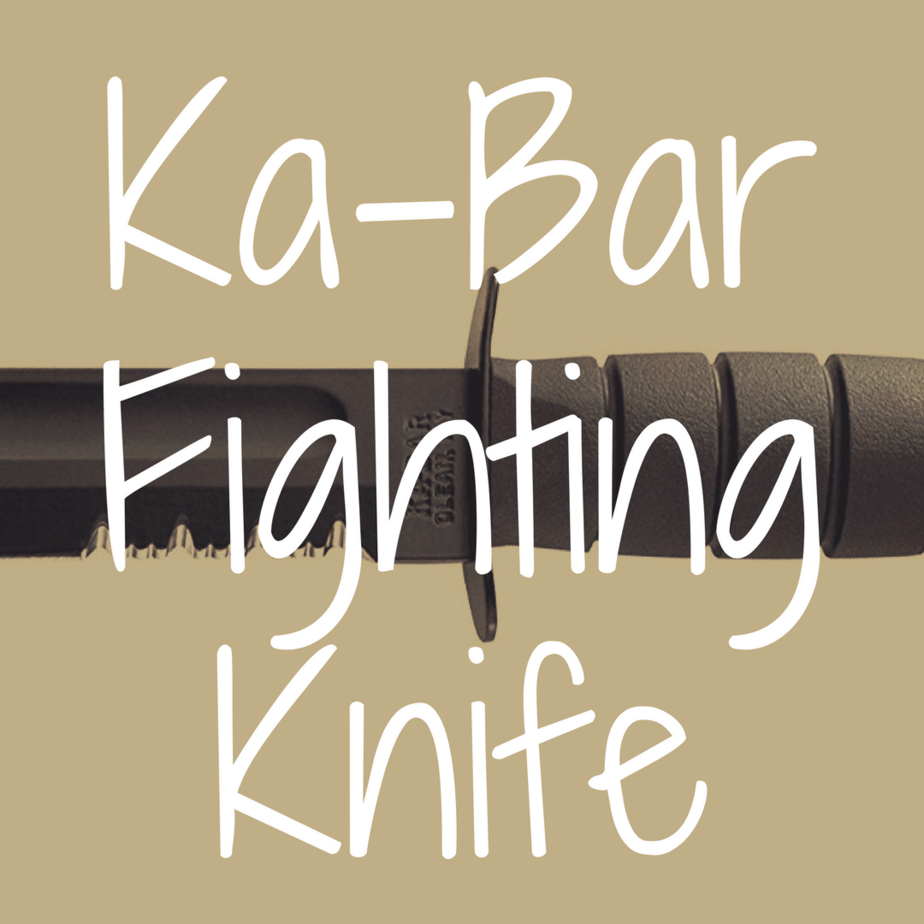 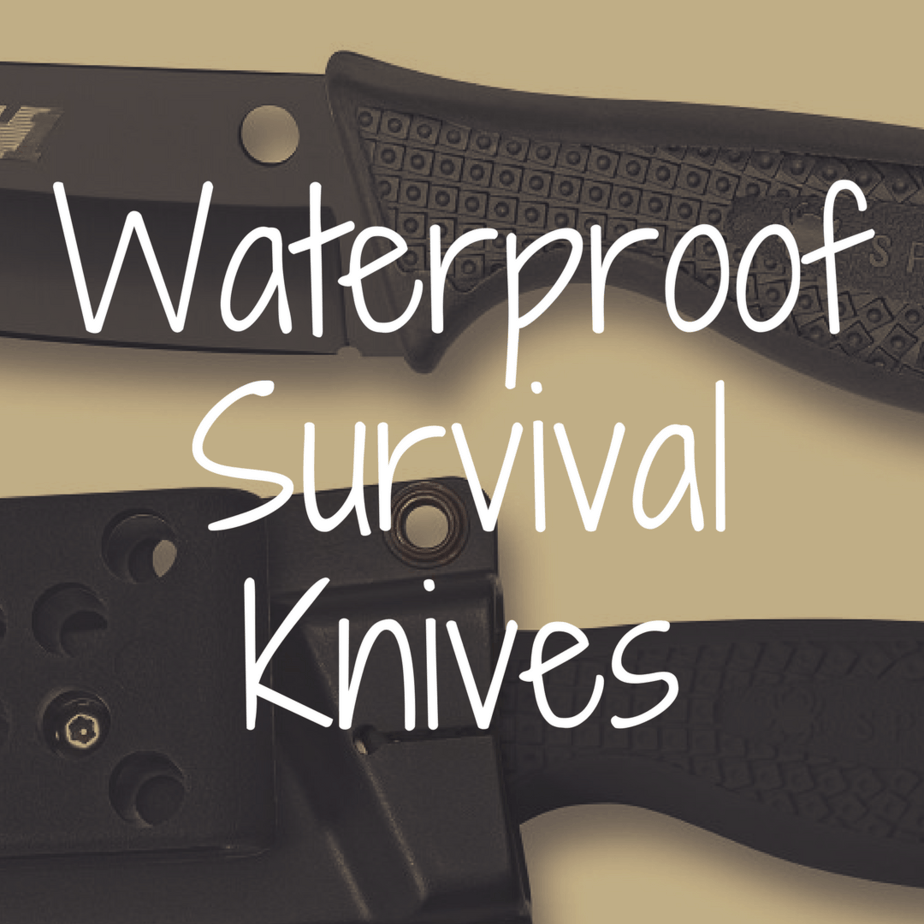