You are here: Home / Blog / How to Choose the Best Credit Card Knife?

A credit card knife isn’t the tool that you’d see in the hands of Crocodile Dundee or Rambo. It’s not going to be used to skin the hide off a deer or cut through glass to save someone trapped inside a car.

There are other knives designed to do those things.

The knife that can be as small as a credit card, on the other hand, is ideal for both men and women. It can lend a touch of suavity for a man, and at the same time, give a woman the extra confidence of knowing that she’s got a tiny tool belt in her purse.

The credit card blades or knives, so named because it’s small enough to fit inside your wallet, has a unique style and usefulness that’s part 007, part handyman. It’s a knife that goes everywhere you go, along with your wallet and your car keys, and you always have it on hand when you need a sharp blade.

The wonderful thing about these knives is that they can cost you less than $20. The beauty of this kind of knife, too, is that you have so many quality knives from which to choose.

What Are the Most Popular Knives?

Below, use our interactive guide to compare some of the most popular pocket knives.

Credit Card Knife: What Else Comes With It?

We’ve gotten accustomed to seeing more and more of the things we use—computers, cell phones, etc.—shrink dramatically in size as they increase enormously in capability. This is true of credit card knives, which confirm the adage that good things come in small packages.

A credit card tool may consist of parts that can be removed for standalone use. This may include tools such as flashlights or clips, so that the tool can be attached to a flat surface. Some credit card tools even have a theme, such as golf, where a divot repair tool, ball marks, pens for keeping score, a grip rest, and a scraper are all included. So if you’re thinking of a gift for the person who has everything, think small—a credit card blade might just be the way to go.

A typical card knife, small as it is, often includes some of the following useful tools:

This British-designed, lightweight knife folds up to the size of several credit cards and fits into your wallet. The 65mm cutting edge blade is only 2.2 mm thick, but it’s sharp, and the folding mechanism is smooth, and the overall effect is elegant. It unfolds and locks in place as it should, and lays flat when it’s folded back into shape. The CardSharp2 isn’t intended to be a general hard-use utility knife or a combat knife, nor is it the kind of knife that you’re going to put to use on a daily basis because it’s not designed for that level of durability.

In response to some complaints about the “fancy but flimsy” CardSharp2, the design has been improved, and the CardSharp 4 body is no longer made of plastic which can crack, but of aluminum for greater durability.

The new two-part safety lock of the CardSharp4, new rivet holding the blade, and the updated hinge, along with new folding engineering, are popular upgrades, but you can kiss the $9.97 price goodbye—along with the upgrades in quality comes an uptick in price. The CardSharp4 is $63.

So if you want an affordable knife that you don’t intend to use a lot, the CardSharp2 is still a bargain. Know how often you intend to make use of your knife before choosing which one to purchase and you won’t be disappointed.

You knew that there would be a Swiss Army Knife in the list, right?  Victorinox doesn’t disappoint, and it only costs $17.

At 3/16” thickness the Swiss Army Secretary fits easily into your pocket; so easily, in fact, that you might want to try this trick so that the knife doesn’t slip out of your pocket: roll a rubber band around the end of the knife to add a little extra friction that will help the knife to stay put until you reach for it.

The credit knife has two tools, a large and a small blade, stainless steel components to prevent corrosion, and a lifetime warranty. And it’s a Swiss Army Knife—sometimes that’s all that you need to know.

Yes, it fits in your wallet. Yes, it has tools. Yes, it has a serrated blade. But this knife doesn’t suffer from an identity crisis over whether it’s going to rescue your life or just make your everyday life a little bit easier, because sometimes there is a knife that can do it all.

It’s simply Tool Logic’s way of making sure that you have everything that you need right inside your pocket. The knife brings along a 2-inch serrated blade, a magnifying glass, ruler, scissors, toothpick, and tweezers.

Other versions of the Tool Logic knife carry different tools, including a firestarter, a whistle, and a compass. If you plan to use the knife at all hours and under unpredictable conditions, or you’re a first responder, you might want to try Tool Logic SVC2 Survival Card which comes with red LED for better illumination at night.

The SwissCard is like having a toolbox in your wallet, because in addition to the 1.5 inch stainless steel blade, it also features nine stainless steel tools, including a letter opener, scissors, toothpick, nail file, tweezers, pen, and screwdriver.

It’s also available in pink, so if you’re looking for a useful gift for a daughter who’s going off to college, this makes a perfect choice. And since the knife is only $22, you’ll be able to still afford to pay her tuition bills!

If Swiss Army Knives are smart enough for NASA and durable enough to travel to Mt. Everest, they might just be able to handle a college freshman.

Founded in 1986, the SOG Company chose its name from a Special Operations Unit that developed a knife during the Viet Nam war. Maybe that “special operations” inspiration is why the SOG Access Card brings power as well as versatility to this card knife which weighs 1.8 ounces, has a 2.125-inch VG10 blade, and is 3/16” thick without the clip.

The SOG’s Arc–Lock gives you easy, ambidextrous, one-handed opening and a strong, dependable locking mechanism. The stainless steel handle even has some tools hidden inside, and the pocket clip, which is included, can be used as a money clip, making it a handy accessory for both indoor and outdoor excursions.  SOG knives are made and/or assembled in the U.S., Japan, Taiwan, and China.

The tools on a card knife aren’t as fully functional as a full-sized tool would be, but it’s a lot easier to carry a credit knife in your pocket at all times than it is to carry your knife collection, toolbox, or junk drawer. If you need to open a package or cut something, you’ll be grateful for the all-in-one knife in your wallet that saves the day.

Traveling with a Knife 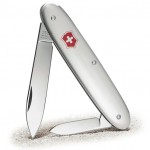 It’s important to remember that knives, no matter how small in size, are still regarded as weapons.

When traveling by air, you’ll need to keep in mind that the contents of your pockets will be examined. For a brief time in 2013, the Transportation Security Administration considered dropping its ban on small knives, but following fierce reaction to this proposal, the ban on knives has been maintained.

So before you travel, check the contents of your pockets well before you reach TSA officers.

Another warning—if you’re entering a building such as a courthouse, make sure to empty your pockets beforehand, or the armed security staff will be confiscating your knife before you reach your destination.

Credit card knives are handy resources, but you can become so accustomed to having yours around that you forget that others—like the men and women in blue who tend not to smile when a blade shows up on the scanner—will not share your enthusiasm. You might not get your knife back.

So do be careful.  But it’s important to know that if you’re looking for a small, everyday knife that you can take with you on the go and help you do a variety of helpful tasks in a pinch, it doesn’t get much better (or affordable) than these handy knives.

3) 7 Survival Kits That Will Save Your Life