Every tool we use requires maintenance.  The folding pocket knife is a wonderful convenience, and it’s surprising how little maintenance most pocket knives need, but there are still a few things we need to keep an eye out for.  Pivot pins, for instance, can come loose, the edges can dull, the clips can break, and, the steel can rust.  And although we will probably never have a perfectly maintenance free folding knife, I think that the closest we can come in today’s market to that is the Spyderco Salt 1. 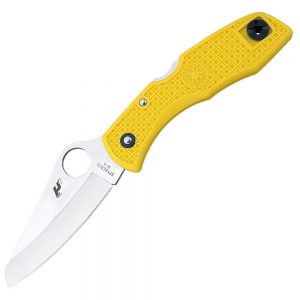 This is a knife with a simple construction to reduce maintenance, a sturdy pocket clip, durable FRN handle scales, and, best of all, a rustproof blade steel in the H1.  Although it was designed for use by divers or seamen, on paper it looks like a great EDC option for anybody.

After all, even if you know how to sharpen a knife, or know how to get rid of surface rust, that doesn’t mean that you want to spend time worrying about and doing those things.

For the most part, the Salt 1 doesn’t disappoint in use.  If you’re willing to put up with a few quirks that come with the somewhat specialized hardware, this is an excellent EDC knife to use by the waterside or in a dry environment.

Before we get started, please use our table below to compare the Spyderco Salt to a handful of other worthy competitor knives.

The Salt 1: A retro knife design?

There aren’t a lot of knife companies that preserve their production history better than Spyderco.  Not only are they lucky enough to have one of the most rigorously-maintained and thorough wikis around,  they’re also willing to revisit proven, older designs if the demand is there.

And while plenty of people love the Delica 4, a lot of users still preferred the older, lighter Delica 3.  The Salt 1 is almost identical in design to the Delica 3; the differences are the blade steel and the blade shape.  Even then, the lightweight, linerless handle of the 3 (it’s most desirable feature) is preserved perfectly here.

The Salt 1 is part of Spyderco’s vast, somewhat confusing Salt Series of knives.  Currently, the lineup looks like this (ignoring blade and handle scale configuration options, which would double the length of this list):

The presiding feature of the Salt Series is H1 steel, which is a chemically strange steel I’ll discuss in detail below.  As with most Spyderco knives, the Salt 1’s nearest comparisons are other Spyderco knives: the Pacific Salt, the Dragonfly 2, the Delica 4, and the Native 5 Lightweight.

“Rustproof” steel: can it be true?

If you compare the Delica 3 to the Salt 1, the only difference you’ll notice (materials aside), is the blade shape.  The Delica 3 had a pretty pointy drop point-ish blade shape, whereas the Salt 1 has a modified sheepsfoot blade.

For slicing tasks, you’d be hard pressed to notice a difference between the two: both do all the standard EDC stuff very well.  It’s only when you try to pierce cut with the Salt 1 that you’ll run into problems.

This is purposeful—in marine environments there are a lot of scenarios where an aggressive tip can be detrimental.  It can get caught on netting, pop inflatables, or make cutting material next to another person (if they’re caught in it for instance) dangerous.  It makes sense, but away from the water a more acute tip is definitely missed.

The Pacific Salt is similarly sheepsfootish.  The Dragonfly 2, in either its Salt or its standard incarnation, has a leaf-shaped blade that pierces quite well.  With the Delica 4 you have options: the older, sabre ground model with a more rounded-over tip, and the full flat ground model with a more acute tip.  Either one is going to pierce better than the Salt 1, if that’s something you find yourself doing a lot in your day-to-day life.  The Native 5’s blade shape is almost an upsized version of the Dragonfly 2’s, and does it all just as well.

The steel is where the Salt 1 really distinguishes itself.  Its steel—H1—is billed as a completely rustproof steel, and extensive testing by the knife community indicates that this appears to be the case.

H1 has almost no carbon (the element in steel that leads to rust), deriving its hardness from nitrogen.  In terms of performance, it is similar to low-mid-tier steels like AUS-8.  Not bad, in other words, but not wonderful.

But H1 has one other interesting characteristic that may mean its performance will improve over time: it is a work hardening steel.  As you use H1, its HRC actually goes up, so theoretically your edge retention should improve over time.  There doesn’t seem to be a consensus as to whether or not the difference is noticeable, but it is worth mentioning.

The Pacific Salt has the same steel, obviously.  The Dragonfly 2 comes in many different steels, including H1, but its standard blade steel is VG-10, just like the Delica 4.  VG-10 is very rust resistant.

In all honesty, it is probably more than rust-resistant enough for most users, but it’s harder to sharpen than H1, so I still prefer the rustproof steel.  The Native 5 comes in S35VN, a legitimate super steel that I would take over any of these steels, even if I were working on the water.  Corrosion resistant, with excellent edge retention and feasible sharpening, S35VN is the easy winner.

Classic Delica 3 handle: good, but could be updated

The Salt 1’s handle (which is identical to the Delica 3’s handle) is pretty good.  It’s more squared-off than the Spyderco Delica 4’s handle, but in terms of general ergonomics about as good.

Some people may find that it is a little dictatorial: instead of letting you decide how to hold it, it kind of ushers your hand into a specific grip.  It’s a very comfortable grip, so I’ll give it a pass, but I would always rather have the options that a more streamlined, neutral handle would offer.

One other small gripe I have with it is the texturing.  It isn’t bad, but the Volcano Grip checkering isn’t as good as the Bi-Directional Texturing that Spyderco introduced on the Delica 4.  I understand they want to remind people of the Delica 3, but I don’t see why that faithfulness has to go so far as to employ a lesser texturing.

The Pacific Salt’s handle is larger, allowing for a little more freedom in terms of how you hold it, but not much.  If I were wearing gloves or something I might opt for it, just because it would be easier to manipulate.

The Dragonfly 2 has one of the best small knife handles of all time.  The Delica 4’s handle is longer and thinner; I like it a little more, but the linerless Salt 1 is lighter, which I appreciate.

The Native 5 again comes across as a bigger Dragonfly 2: the forward finger choil is something I love, and miss when I use a knife without one, like the Salt 1.

Spyderco deviates from the Delica 3 in a small way with the Salt 1’s clip.  It isn’t the older, squared off Spyderco clip that you saw on the Delica 3, but the newer, rounded clip on most of their current knives.

Either clip is adequate, but I appreciate the newer design: I think it’s just a little bit tougher.  But the big selling point of the Salt 1’s carry is the weight.  The Salt 1 has a 3” blade, with a sub-2 oz. weight, and it carries so well because of it.  It feels a little wider than the Delica 4 because it has an oversized Spyder Hole, but the weight makes up for it.

The Pacific has the older, squarer clip, and is obviously a bit heavier, but still carries quite good.  The Dragonfly 2, as you would expect, is the lightest knife of the bunch, tipping the scales at about 1 oz.  It also has the wire clip that a lot of people really like: I find it a little fragile personally.

It’s the only clip I’ve ever bent twice.

The Delica 4 and the Native 5 both use the same clip as the Salt 1, and both are light for their size, but they have steel liners and thus aren’t quite as nice in the pocket as the Salt 1.

Lockbacks are simple, stable, and ambidextrous

I’m not sure why lockbacks get such a bad rap.  I think, because they’ve been around longer than liner locks and framelocks, they have this aura of “outdatedness.”  But the truth is that they’re great: they require virtually no maintenance and, in my experience, although they may have a little flex up and down, don’t develop much bladeplay over the years.

And nobody does the lockback better than Spyderco.  The Salt 1’s lockback may not be flashy, and it may not provide the fidget factor we get with liner locks and framelocks, but it will work well for as long as you have the knife.

All four competitors have the same quality lockback.  There isn’t much to differentiate one from another.  The Native 5 lacks the Boye Dent, a little cut out on the disengagement bar that theoretically makes it harder to accidentally close the knife.  Other than that all four will be perfectly serviceable for the duration of their life.

The Salt 1 is a worthy twist on an old favorite

Dive knife reviews are pretty few and far between, because those blades tend to be so specialized.  And yet, there are tons of reviews of the Salt 1, a knife ostensibly designed for marine use.  The reason for that is, designed for aquatic use though it may be, the Salt 1 is built on the chassis of an all time EDC classic.

If you want a knife that you can carry every day, and use in pretty much any situation without having to worry about it, the Salt 1 should be on your radar.