Having the best hunting knives in the world means nothing if they have gone dull and you cannot properly sharpen them.  Sharpening by hand can be a tricky task, however, as most do not have the finesse to maintain the proper sharpening angle to produce a razor sharp edge.  Over the last few years, though, some manufacturers have developed solutions that can produce knife blades sharp enough for surgery.

This article will look at what factors go into a high quality knife sharpener, and later, I’ll provide you with five of my absolute favorite knife sharpeners for hunting blades.

Features of a Good Knife Sharpener

When you sharpen a knife, what you are doing is grinding off the rounded edge of the knife, then re-beveling it to a desired angle and removing the burr created by the bevel.  Traditionally, this meant using a whetstone lubricated with water and oil and then free-handing the sharpening while one hoped they did so at a consistent angle.

Of course, not many can maintain a consistent angle when eyeballing it, and many a knife was ruined during the process of trying to restore its blade.  To be considered a good sharpener, this article limited the possibility to include only those that did the following:

Requiring a consistent angle be applied between sharpening stone and knife ensures that the knife blade will burr properly and then, when that burr is removed, will maintain a consistent edge.  With knives, the angle used to sharpen the blade is determined based on the needs of the knife.

Based on these factors, the following knife sharpeners are ideal for those looking to ready their hunting knives for the field.

Once that is done, the user can attach the sharpening stones and begin sharpening with the same sort of hand movements normally seen when someone uses a NordicTrack or an elliptical machine.  The Wicked Edge 100 is extremely customizable, and the blade angle can be set at anything from 15 to 30 degrees.

The vice of the wicked edge can hold a knife up to 3/8” thick, which means it can handle even the thickest bushcraft knives.  Because of the way the arms are locked in place, a consistent angle can be maintained every time the user sharpens a knife.

Wicked Edge sells a wide variety of sharpening stones, from 50 grit extremely course diamond stones to 3 micron stropping films (for those that find leather strops too rough, apparently).  Like the Wicked Edge 100, these stones are all expensive (and retail for roughly $70, which is as much as some mid-range knife sharpening systems).  The wide variety of stones available for the Wicked Edge 100 mean that even the dullest knife or a damaged knife can be restored to good working order.

For those that want knife sharpening to go quickly, yet do not want to pay $300 or more for a sharpening system, an electric sharpener like the Work Sharp Ken Onion Edition may be the way to go.  The Work Sharp Ken Onion sharpener, endorsed by the knife designer frequently associated with CRKT blades, is a belt knife sharpener that works much like a belt sander (frankly, virtually identically to how a belt sander works).

The Work Sharp Ken Onion Edition uses blade guides to ensure a consistent angle is maintained, and has tolerances between 15 and 30 degrees for blades (the sharpener can be used without the guides as well for sharpening fish hooks, arrows, and tools, such as axes and Pulaski blades).  However, there is a varying quantity of flex in the abrasive belts used on the sharpener, which means that, with inconsistent pressure during sharpening, a user could change the angle of the grind on a knife.

Despite the flex in the abrasive belts, the blade guides do a good job of helping a novice knife sharpener avoid ruining their knives.  Care must be taken, however, to not accidentally round the tips of blades.

Work Sharp offers abrasive belts for its sharpener that vary from a grit of 80 to 12,000, and also offer specialty belts to sharpen ceramic blades.  The wide variety of abrasive belts ensures that even the most damaged knife or tool could be made sharp.

The belt flex that, as discussed above, can make the Work Sharp less than precise does allow it to be able to sharpen unique blade shapes, such as gut hooks and serrated blades.

Work Sharp retails its Ken Onion edition sharpener for approximately $125, which is substantially less expensive than the Wicked Edge 100.  Belts retail for less than $20, so the replacement costs for the sharpener are not astronomical.

Sometimes, the best way to ensure the consistency of sharpening of a hunting knife is to look for a tool from the world of cooking, and the Chef’s Choice Angle Select is that tool.  The Angle Select is an electric tabletop knife sharpener intended for chef’s knives (hence the name), and will sharpen blades to two different angles: 15 degrees and 20 degrees (15 degrees being the preferred angle for Japanese-style cooking knives and 20 degrees being the preferred angle for western cooking knives).

The Angle Select has three fixed chambers that a user runs their knives through to sharpen them.  Because there is no adjustment and the chamber holds the knife in place, there is little room for failure at setting the angle of a blade.

The downside to the Angle Select is that it does not work with anything that cannot fit within its three chambers, ruling out the ability to use this sharpener to sharpen axes and other tools.  Additionally, while the Angle Select will work with serrated and plain edge blades, it will not produce an edge of any shape other than 15 or 20 degrees.  While a 15 degree bevel is perfect for cooking knives, it is a recipe for disaster (in the form of damaged and chipped blades) if applied to a hunting knife that has to come into contact with rope, wood, and bone.

Some may prefer the ostensibly duller 30 degree bevel used on bushcraft knives because they expect to be rough on their knives.  This is not possible with the Angle Select.  However, if one is content with a 20 degree bevel on their knives, the knife is virtually idiot-proof.

The Angle Select retails for approximately $150, slightly more than the Work Sharp Ken Onion edition.  This is particularly expensive given that the sharpening wheels used in the Angle Select cannot be replaced (as far as I can tell), meaning that the device suffers from planned obsolescence.

Lansky’s system is based on guide rods and a knife clamp, much like the far more expensive Wicked Edge System, and has four angles that are available to use: 17 degrees, 20 degrees, 25 degrees, and 30 degrees, which allow for all of the major bevels needed for kitchen knives, everyday carry knives, hunting knives, arrows, fish hooks, and tools.

Additionally, though it does not come with a base, the Lansky system works best when mounted on a base.  Lansky provides two different types of bases, one which can be anchored with a c-clamp, and the other which can be permanently anchored with screws.  Retailing for approximately $75.00, the Lansky system is extremely reasonably priced compared to the more expensive options on this list.

Of all the sharpeners reviewed on this list, the Spyderco Sharpmaker is the most affordable, retailing for approximately $50.00.  The Sharpmaker is designed with angled rods set into a horizontal plate for easy sharpening (as one would just hold the blade tip straight down as they passed the blade across the stones).

So long as a user holds the blade in a vertical position as they pass the blades along the sharpening rods, they will maintain a constant edge.  The downside to the Sharpmaker is that there is no certainty to the process; a constant edge can be made, but the sharpener cannot be set to specific measurements as it can be with the other sharpeners on the list.

The Sharpmaker can restore damaged knives as well, but it will take a very long time to do so.  However, if a user is looking for a sharpener that will work well on a basic level, and without a lot of bells and whistles, the Spyderco Sharpmaker is a fine option.  Additionally, the Sharpmaker comes with rods that makes it functional as a ceramic knife sharpener.

What good is a knife if it’s dull?  The truth is that if you’re going to invest in a razor sharp knife, you might as well put the same effort to look into a quality knife sharpener.  That’s where the Chef’s Choice 220 sharpener comes in, a product that features unique Hybrid technology that essentially… 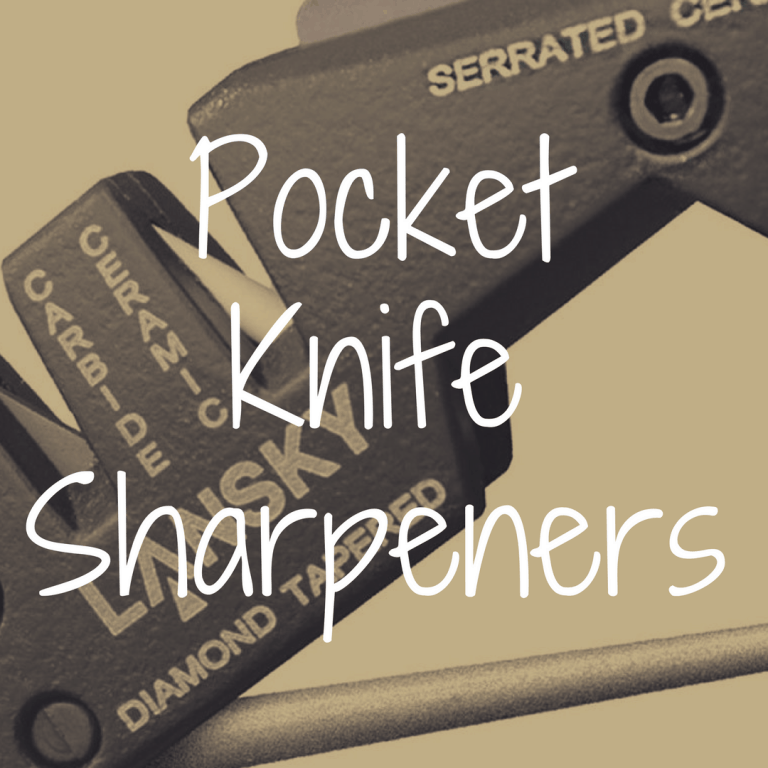 Pocket knives are used so often in our day-to-day lives that, out of all the different blades we have and use, they require the most consistent maintenance. Below, please take a look at a variety of very popular knife sharpeners currently available on the market: Best of the Best: Pocket Knife Sharpeners There are almost… 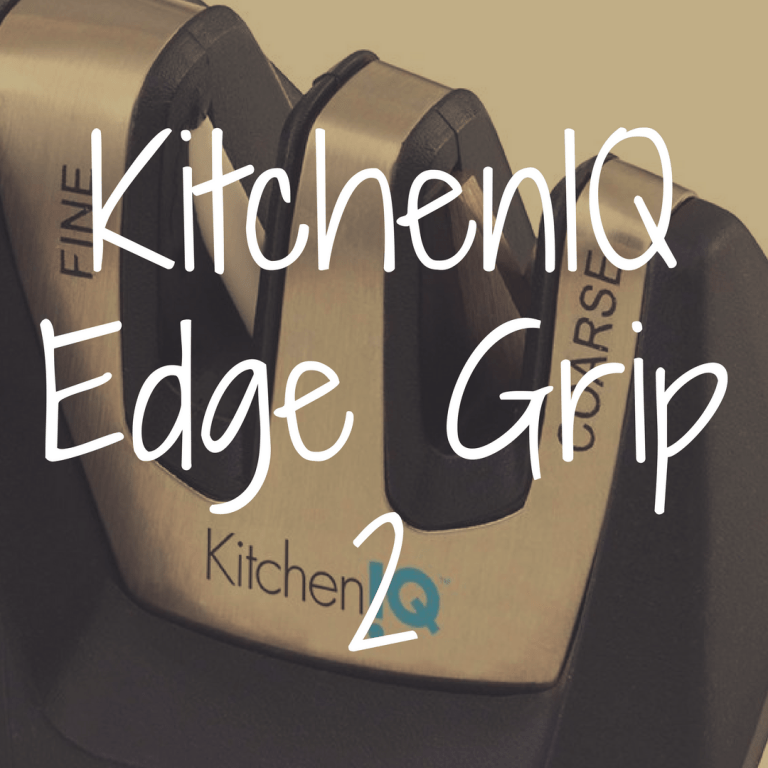 If you’re in the market for a manual knife sharpener that will be reliable, easy to use, monumentally affordable, and relatively small, look no further than the KitchenIQ 50009 Edge Grip 2.  In this review, not only will be cover the features and specs of this little sharpening system, we’ll also answer some of the… 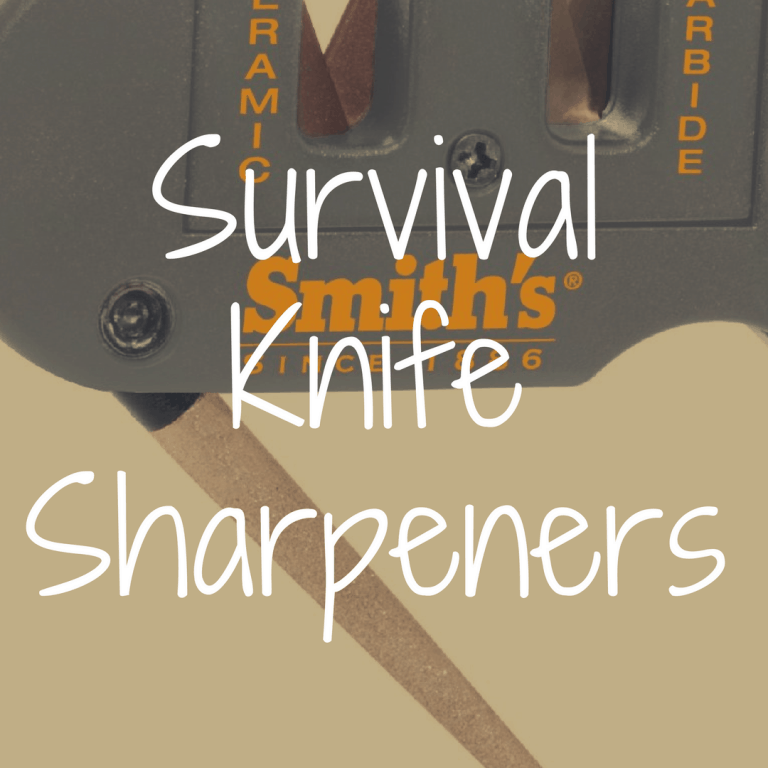 Knives are one of the oldest and most essential tools for survival. In the wilderness they are used for many tasks, from batoning to creating feather sticks to skinning an animal. It takes a user years and years to learn what survival knife they like best, and why, and how to use it to its… 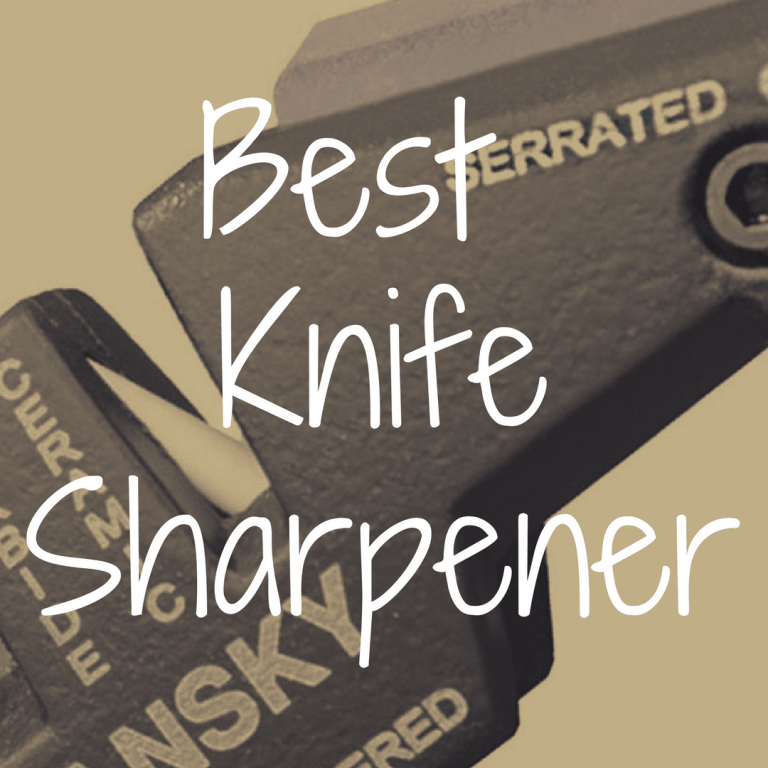 Finding the best knife sharpener can take a little time and research, but if you do it correctly, not only will you get a sharpener that keeps your blades razor sharp, but you just might end up saving both money and time in the long run. In this article, we’ll dive head first into the… 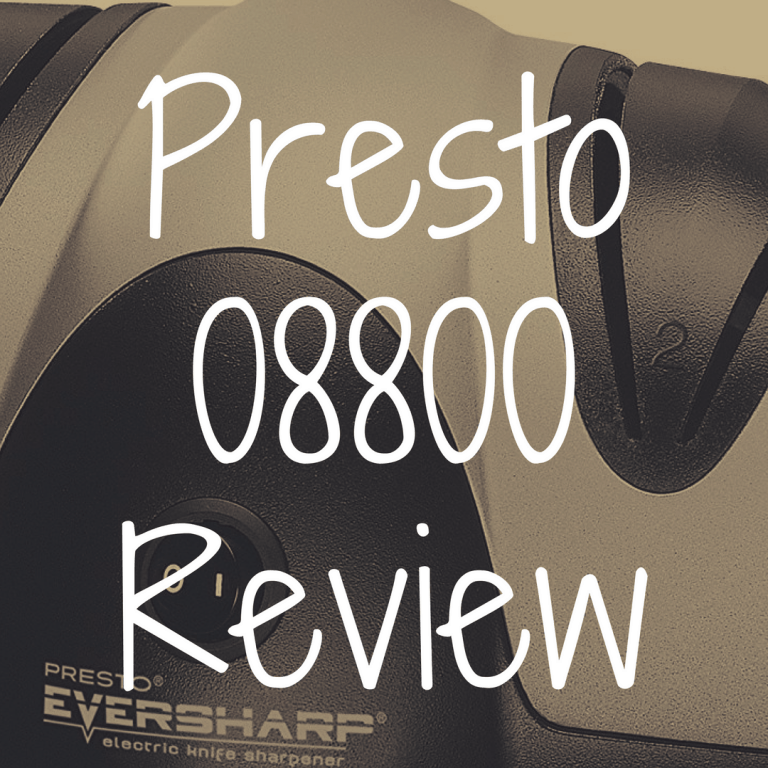 The Presto 08800 EverSharp Electric Knife Sharpener is a knife sharpener from National Presto Industries, Inc.  This newest entry into the electric knife sharpener market features a sleek, modern design that will fit well into most kitchen décor styles. The product comes with a black and silver motif that looks right at home in a…