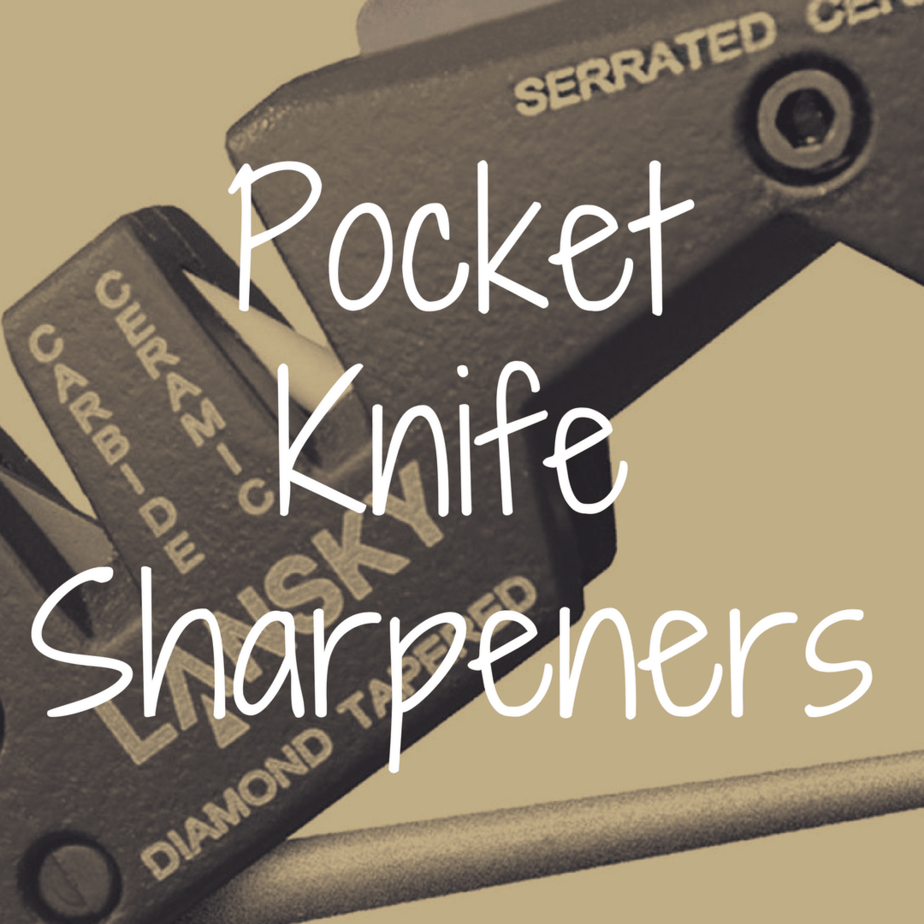 Pocket knives are used so often in our day-to-day lives that, out of all the different blades we have and use, they require the most consistent maintenance.

Below, please take a look at a variety of very popular knife sharpeners currently available on the market:

There are almost as many options for sharpening as there are knives, ranging from the most rudimentary “pocket sharpeners” to complex and contained sharpening systems that almost operate by themselves. They all have their merit, but I’ve chosen the five that I think are best. Each has something unique to offer the prospective user, so let’s take a look. 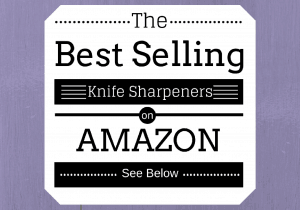 For a lot of knife users, the Sharpmaker is the definitive piece of knife sharpening equipment. This is because it combines speed, consistency, and a certain level of quality in a very affordable package.

The Sharpmaker comes with four stones–two at a coarser and two at a finer grit–that are set in into angled slots on a plastic stand to create the appropriate angle for sharpening. The user then passes their knife against the stones in a downward pulling cut, first on one side and then the other. The four ceramic stones have a wide and a narrow edge, and the sharpening procedure is 20 passes on each side for each set of stones.

That’s all there is to the Sharpmaker. It is simple and effective, and will get your knife from dull to a working edge in less than ten minutes once you get the hang of it.

The Sharpmaker’s simplicity, however, does work against it. Because there is only one angle available for sharpening, it is much harder to reprofile or regrind an edge on the Sharpmaker than on some of the more involved sharpening systems. Additionally, the edge the Sharpmaker puts on your knife, while useable, is not outstanding. You’ll never get the high-mirror-finished edges that something like the Edge Pro Apex (discussed below) can achieve.

In some ways, however, that’s beside the point. The Sharpmaker’s appeal lies in its straightforward, unflashy utility; anybody can take their knife to the Sharpmaker and get it useable again quickly. Like the knives that Spyderco makes, the Sharpmaker is instantly intuitive, and that, combined with its low price ($50), makes it a great first choice for somebody that wants to learn the basic principles of sharpening. 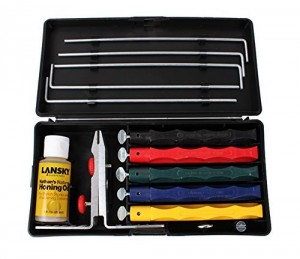 The Lansky Deluxe bridges the gap between the simplicity of the Sharpmaker and the more complex, consistent angle sharpening systems like the Edge Pro Apex.

The Lansky Deluxe is a clamp that can be attached to the end of a workbench or table, with a vise on the opposite end that holds the knife in place. Above that is an arm that holds a sharpening stone. This arm is manually passed over the blade to sharpen it. This is what we are talking about when we say “consistent angle sharpener:” because the knife is being held by a clamp, and because the arm only passes at certain angles, it is very easy to maintain a clean, consistent edge along the length of your knife. The system comes with five stones:

I really feel this is excellent, given that sharpeners four times the price don’t usually come with such a range of grits.

The Lansky Deluxe is the ultimate intermediate sharpener’s system. It can put a very fine edge on your knives, and is not a bear to learn to use. Its greatest downside is that it does not have the expandability of other consistent angle sharpeners. This aside, it is the best choice for a new user that wants to educate themselves on sharpening, but doesn’t want to spend a ton of money out of the gate; the Lansky Deluxe can be had for $50, and could be the only sharpening system you’ll ever need.

The Edge Pro Apex is, famously, the preferred sharpening system of Nutnfancy, the premier gear reviewer on YouTube. Once you see the results this system is capable of giving, it is easy to see why.

The Edge Pro Apex is a consistent angle sharpener, very similar in theory to the Lansky Deluxe: stones of increasingly fine grits are passed over your pocket knife until it gets as sharp as you want it to be. Instead of clamping to the edge of a table, the Edge Pro Apex is a sort of tripod that attaches to a flat surface with suction cups. This means that it is portable, but because it is fairly large and elaborate, I can’t imagine anybody wanting to take it with them anywhere.

The Edge Pro Apex is the next step in sharpening after the Lansky Deluxe. It is capable of getting overall better results; whether this is from the quality of the stones or the nature of the system itself I don’t know, but it is the case.

The Edge also has the advantage of being expandable; while the basic model comes with only a few stones, additional ones can be purchased, as well as honing oil and other knife sharpening supplies. The other great thing about the Edge Pro Apex is that, because it is so popular, there are thousands of videos from all sorts of Edge Pro owners, not only showing the system in action but also the results it is capable of achieving. In particular I recommend the YouTube user TheApostleP for both great tutorials and stellar examples of what the Edge Pro Apex can do (video below). This community is something that neither the Sharpmaker, as popular as it is, nor the Lansky have.

The Edge Pro Apex starts at $165 for a basic model with two stones, and goes up to $255 for the most elaborate package. If you find yourself pushing up against the limitations of the Lansky, the Edge Pro Apex might be the next step for you. 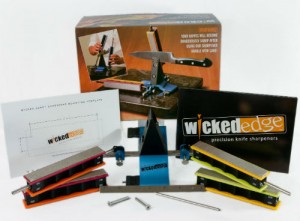 Another option is the Wicked Edge Precision Sharpener. It is clearly in the Lansky/Edge Pro Apex lineage, but has some features that distinguish it from its rivals.

The Wicked Edge requires the purchase of a mounting stone in order to be stable enough to use. This is somewhat of a bummer because it means you need to spend more beyond the purchase of the sharpener itself to begin using it, but the benefit is that the mounting stone is much more secure than either the Lansky’s table clamp or the Edge Pro Apex’s suction cups.

Neither of these options are bad, but the Wicked Edge’s method is just superior. It also offers more options for stone grits than either the Edge Pro Apex or the Lansky Deluxe, which means that an enthusiast can put some really, well, wicked edges on their knives. The Wicked Edge also comes with more stones out of the box than the others: you get two stones at each of four grits from coarse to very fine, so while there is more cost up front ($300), in some ways you get more value for your money.

The acutest angle you can put on a knife with the Wicked Edge is 15 degrees, whereas the Edge Pro Apex can get as acute as 10. While that is impressive, it shouldn’t be an issue for most users, because putting a 10 degree angle on a knife is just asking for it to chip out on you. The Wicked Edge allows you to go anywhere from 15 to 30 degrees, which is more than adequate.

The Wicked Edge has proven itself in the competitive field of consistent angle sharpeners, and is worth your consideration if you are serious about edge maintenance.

All the above-mentioned sharpening systems are attempts at removing human error from the sharpening equation. They all silently acknowledge that sharpening is a difficult task, and that by automating or regulating it they can make it simpler for the average user.

Sharpening a knife by hand is difficult. While the actual operation at its basic level is simply passing your pocket knife over flat stones of various grits, it requires a great deal of skill to take an edge to a very high sharpness, or to take out chips and gouges from your blade, or to remove a burr. While using an Edge Pro Apex or a Lansky requires you to learn the ins and outs of a device, learning to sharpen freehand requires you to gain a skill.

The advantages are many, however. Freehand sharpening gives you great freedom in how you maintain your blades. You can set the edges to be more or less acute, depending on what you want to use the knife for (typically with a pocket knife, for everyday tasks, you want an edge that is acute enough to be keen, but not so acute as to be fragile).

There is essentially no limit on how acute or obtuse you can go, if you have the skill and the patience. You can change the grind entirely; convex edges, for instance, are very popular now, even on pocket knives (the Fallkniven U2 is a popular example); if you wanted to put a convex edge on your pocket knife, and were skilled enough, you could do so with your stones. It is true that sharpening systems like the Edge Pro Apex allow you to do a lot of this stuff too, but not with the degree of fineness you can achieve with freehand sharpening.

Freehand sharpening develops your understanding of steel at a very quick pace. No matter what method you use to sharpen your knives, you’ll develop this familiarity, but when you are freehand sharpening it comes quicker because you are right behind the edge, manipulating your knife against a stone instead of a stone against your knife.

In short, although it is outwardly the simplest method, freehand sharpening is really the culmination of sharpening as a skill, and as such I recommend it to all lovers and users of cutlery.

Owning and using a pocket knife means that one day you’ll have to sharpen it; even the world’s most impressive super steels are going to lose their edge eventually.   Learning to sharpen your knives with any of the systems above (or, indeed, one of hundreds of others) is paramount.

We carry around knives because they are helpful to have everyday, whether it be for breaking down a box or cutting up an apple at lunch; and by ensuring that our tools are maintained in the way they should be, we guarantee that they perform the way we want them to.

Therefore, having a sharpening system is essential for any knife owner. And in my opinion, the ones above are the best of the best.

For more helpful reviews of pocket blades, be sure to return to Reliable Knife!

1) How to Choose the Best Knife Sharpener? 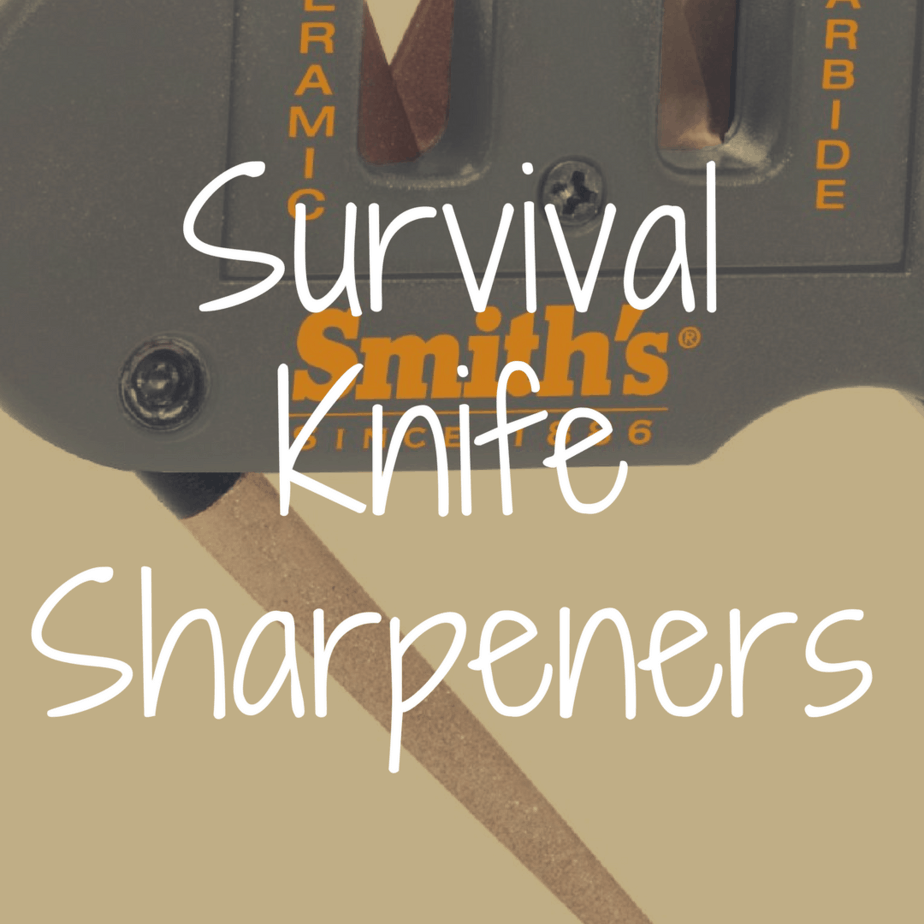 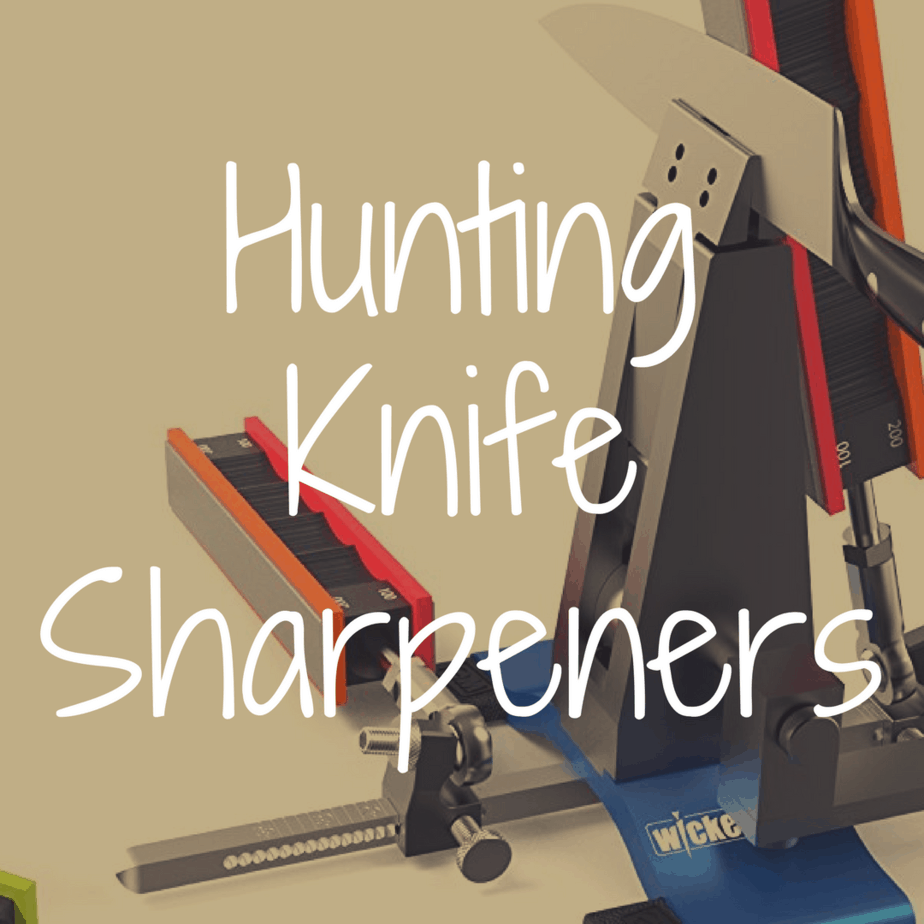 What is the Best Hunting Knife Sharpener? 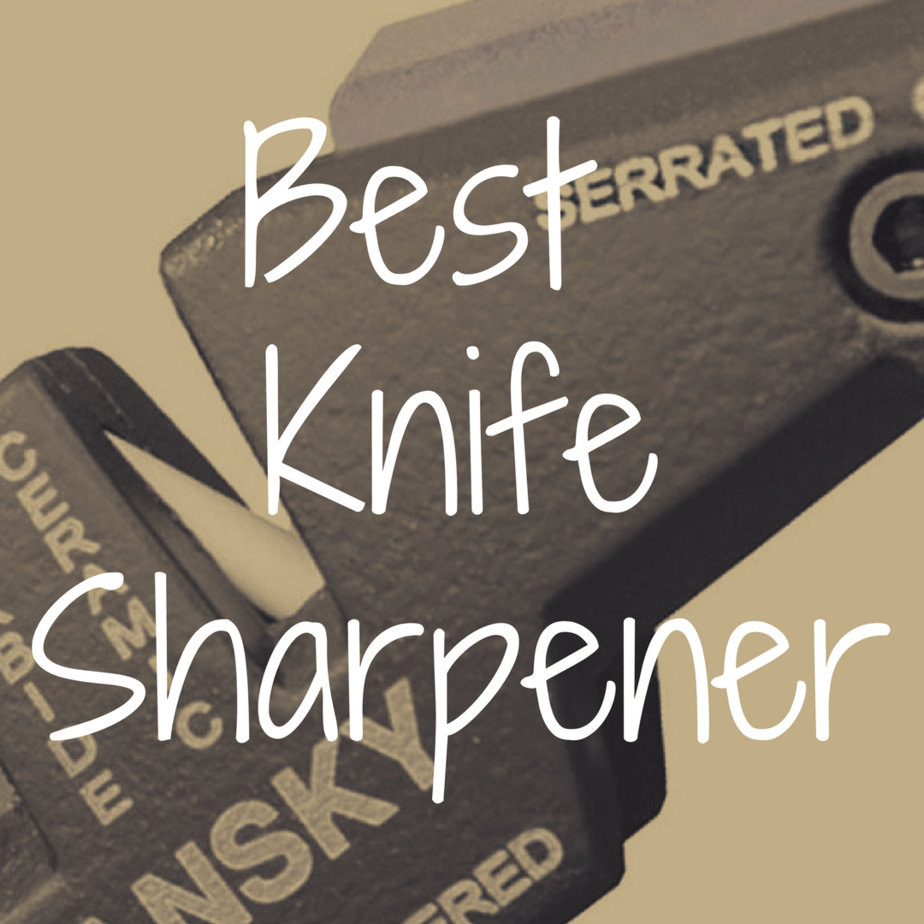 How to Choose the Best Knife Sharpener 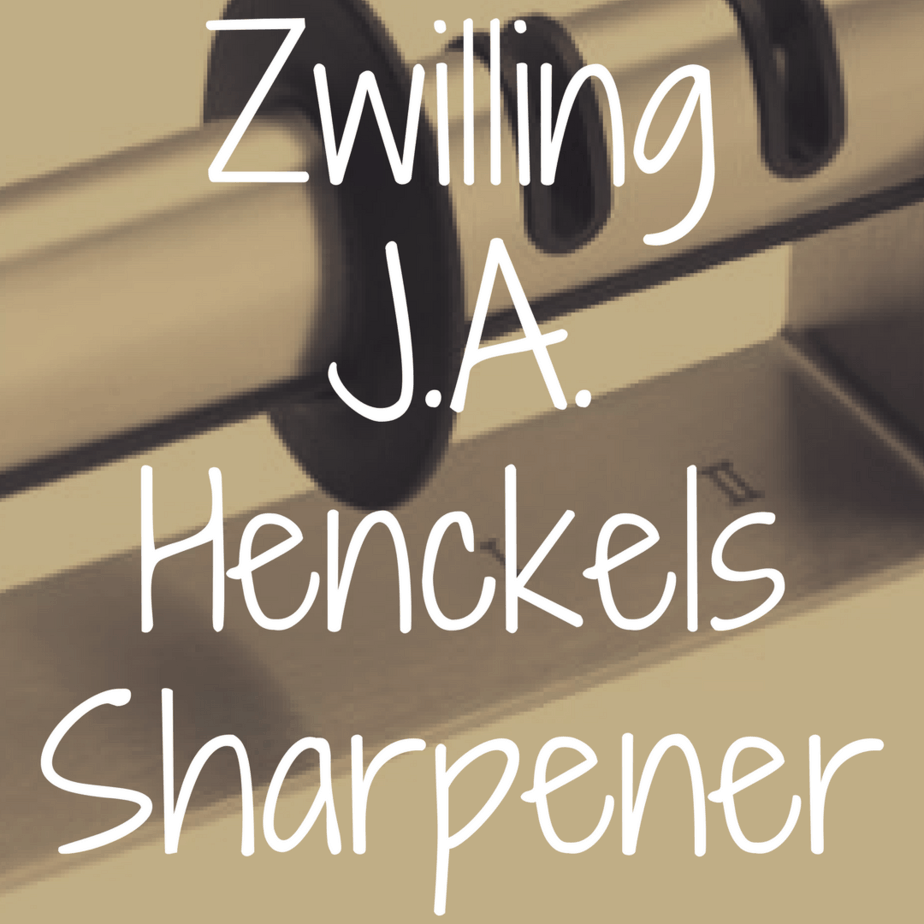